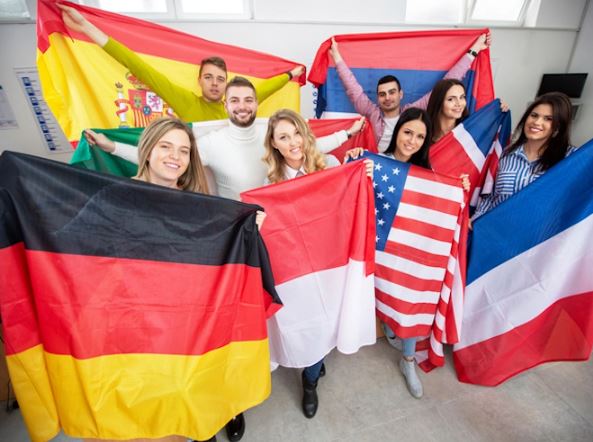 Business schools in the United States saw a slump in international enrollment during the Trump presidency for two main reasons: The U.S. government has actively discouraged foreign investment in U.S. universities, and Covid-19 will be implemented starting in March 2020. These two reasons combined spell widespread disaster for the economic well-being of B-schools, which have long relied heavily on the revenue they receive from international students paying full tuition.

Columbia Business School – one of the few B-schools to weather the 2020 headwinds and maintain a normal rate of international MBA students – continues to be the leading B-school in 2021, with 48% of students in the current class coming from outside the U.S. or having dual citizenship. That’s up from 44% last year and surpasses the previous record of 47% set in 2019, with Columbia followed by Stanford Graduate School of Business (47%) and Duke Fuqua School of Business. Overall, nine of the 27 schools and five of the top 10 have 40% or more foreign students, up from just one school – Columbia – in 2020. Twenty-two of the 27 schools score 30% or higher, compared to just nine schools, while only one school – No. 27 Georgia Tech Scheller – is below 20%. In 2020, five schools had this dubious distinction.

By 2020, three years of anti-immigrant rhetoric from the U.S. government had already taken a serious toll on MBA graduates’ ability to attract international MBA candidates – though Donald Trump wasn’t the only obstacle in the overseas-U.S. talent pipeline. But the federal government’s hostility to any form of immigration has exacerbated the ever-rising cost of an MBA, and when the coronavirus pandemic broke out in 2020, the bottom fell out.

Government-imposed travel restrictions and difficulties in obtaining student visas depressed the already declining number of international students in a typical MBA class. Forty-one of the 49 top-ranked schools reported losses – and all but eight of those schools had losses in the double-digit percentage range. Some schools went right off the cliff between 2017 and 2020: UNC’s Kenan-Flagler Business School lost 57.4% of its international students, the University of Texas-Austin McCombs School of Business lost 41.5%, and Trump’s alma mater, Wharton, lost 41.4%. The pain was evenly distributed across regions: In the West, USC Marshall School of Business lost more than 30%; in the Midwest, the University of Michigan Ross School of Business lost 29%.

The year 2021 brought sweet relief, although pandemic travel and other constraints hampered a full recovery. All 27 MBA programs surveyed by Poets&Quants increased their share of international students compared to 2020, and only three schools were still below 2019 levels-none of them by more than 2%. Fifteen schools saw double-digit year-over-year increases. In the top 10, all schools have increased not only year over year, but also since 2019, with Wharton’s two-year increase at 17 points (to 36%) and Dartmouth College Tuck School of Business’ three-year increase at 12.3 points (to 41%) being the largest.

A GOOD YEAR FOR BUSINESS SCHOOLS IN THE SOUTH.

Times have been tough over the past four years, but they’ve been toughest for schools in the U.S. South – which makes the comeback of these schools all the more impressive.

For the 13 most prominent B-schools in this region – from top-15 schools like Duke University’s Fuqua School of Business and the University of Virginia’s Darden School of Business to less prestigious schools like the University of Florida’s Warrington College of Business and Georgia Tech’s Scheller College of Business – the numbers went in only one direction from 2016: down. The average number of international MBA students at the 13 schools dropped from 29.6% in 2016 to just 18.9% in 2020 – a loss of more than a third. Seven of the schools lost more than 30% during that time period. Another school not included in the table above because we did not have enough data to include it, the University of Tennessee Haslam College of Business, saw its foreign MBA student enrollment drop to 4% in 2020 – the lowest of all the schools we studied, leaving Tennessee with an estimated two MBA students from outside the U.S. in fall 2020.

The recovery is well underway. This fall, three of the 13 colleges – Duke Fuqua, Virginia Darden and Washington University at St. Louis Olin Business School – reached the 40% threshold in international enrollment; both Duke and Darden set school records. Last year, none of the 13 schools had reached 40%. The average percentage of international students at the 13 schools increased more than 10 points to 28.9% in 2021. Two of the largest year-to-year increases were at schools in the South: Rice University’s Jones Graduate School of Business rose more than 18 points to 39%, and Darden posted a 16-point increase (the other school, Wharton, rose 17 points). Duke had the largest three-year increase of any college: 18.4 percentage points. Even Tennessee Haslam had a good year, increasing its international cohort to 15% and quadrupling its actual enrollment to eight.

Only one school in the South saw a further decline from 2020 to 2021: Southern Methodist University’s Cox School of Business, which dropped another 5 points to 15%. That’s about where Cox was in 2018. But Cox isn’t the only school in the South that still has work to do: seven of the 13 schools are still below their 2016 enrollment levels.

OUTSIDE THE U.S., THE PICTURE IS VERY DIFFERENT.

Comparing these scores to those of some of the largest MBA programs outside the U.S., it is clear that European and other schools rely much more heavily on students from outside the country in which they are based. At most of the five Euro-schools we looked at over the years (see above), there has been little change in the number of international students in the full-time MBA program. At four of the five universities, the proportion of international students is 90% or higher; only Spain’s IESE is below that, at 85% – though IESE has seen the biggest change over the past six years, by 4 percentage points.

The largest change over six years since 2016, however, occurred at the Rotman School of Management at the University of Toronto, Canada, which gained 17 points in two years from 2018 to 2020, but lost 10 points last year and is now at 58%.

The post U.S. MBA programs with most international students appeared first on mba.de.