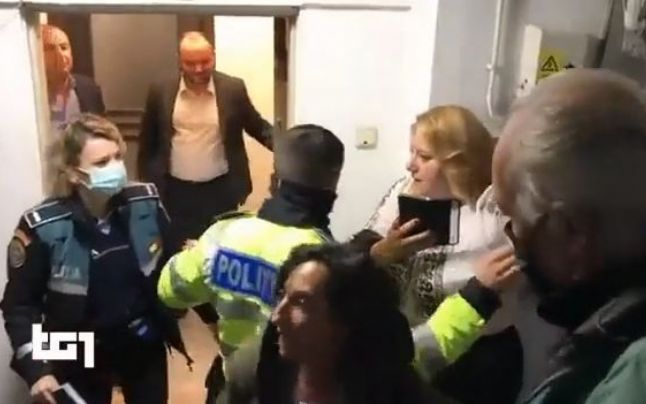 Romanian MP Senator Diana Șoșoac’s conflict with the journalists from Italy’s Rai Uno took place during an interview at the headquarters of senator’s Șoșoacă law firm. Not long into the interview, the senator called her husband and several others, locked the journalists in the office and called the police.

The senator, Diana Șoșoac claims that she was, in fact, “subjected to violence”, and that Italian journalists “forcibly entered the house”. And because the television crew allegedly refused to leave the office, she requested the police to intervene. However, it seems that both the journalists and the police officers who arrived at the scene were physically and verbally assaulted.

The assaulted journalist explained what she went through. “Although I was in Romania, I felt like I was in Syria,” said the Rai Uno journalist, Lucia Goracci.

The Italian journalist said she was granted an interview to clarify senator’s Sosoaca anti-vaccination positions but as soon as the hard questions poured in, the senator started to act out. She suddenly changed her mind about the interview and decided to lock the journalists in and call the police.

The discussion went sideways when the journalist asked for evidence from the anti-vax senator who denies the pandemic is real.

Irritated by the questions, Senator Diana Șoșoacă refused to continue the interview, blocked the door and called the police.

The Italian journalist accuses the Romanian police that, instead of protecting her and the crew, the policemen detained them for no reason.

“There was a clear attempt to falsify and manipulate the evidence. The video evidence shows very clearly how the policeman facilitated to a certain extent the aggression that happened”, said Goracci.

The scandal caused a media and diplomatic storm in Italy and led to the intervention of the Ministry of Foreign Affairs, which asked for clarifications from the government in Bucharest.

Italian media reported that the journalists were freed only at the intervention of the Italian embassy in Romania.

The Romania president also stepped in saying that it is necessary to investigate what happened “so to prevent such an incident from ever taking place again”.

The Romanian PM also reacted saying that “the Romanian government strongly condemns any act of intimidating journalists or obstructing the right to free information of citizens. Freedom of expression, the right to an opinion and access to information are guarantees of a consolidated democracy and the functioning of the rule of law.”

The Italian Embassy in Bucharest said in a press release that it expresses its “appreciation” after President Klaus Iohannis and Prime Minister Nicolae Ciuca publicly condemned the senator’s behavior towards the team of journalists from Rai Uno.